Tom Petty and the Heartbreakers: Runnin' Down a Dream

I finally got around to watching "Runnin' Down A Dream" tonight. Four hours of back story after back story on TP&TH. And I was reminded that during the MTV awards in 1989, Axl Rose & TP&TH performed "Free Falling" together. Amazing: 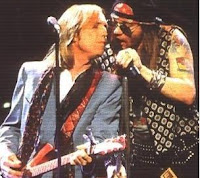 The movie is currently playing on the Sundance channel, who has this to say about it: "Comprehensive, revealing and epic in scope, this rare examination of three decades in the history and development of an American rock band from filmmaker Peter Bogdanovich (THE LAST PICTURE SHOW) focuses on 2002 Rock and Roll Hall of Fame inductees Tom Petty and the Heartbreakers. Incisive interviews and plentiful concert footage tell the story of a band and its front man - described by Bogdanovich as "an American troubadour in the truest sense of the word" - who have earned 16 Grammy™ nominations and sold more than 50 million recordings."

*In the movie, Tom Petty's steadfast beliefs on artistic control are briefly highlighted. (What a bad ass.)

Tom Petty to VH1 - "This is an emergency crisis we're in. The entertainment media is affecting everything on the planet in a very negative way. I'm only interested in rock 'n' roll. Rock 'n' roll is a music that represents truth. Your TV channel has taken the word "rock" and knocked the "roll" off the end. You made rock this umbrella term for everything. That's wrong. Shakira isn't rock. These country artists with fur coats aren't rock - or country. I offered a video to VH1 of my band playing in the studio and they don't want to air it because it had musicians playing in it. They want some babe walking on the beach or whatever. I got turned onto this music by watching the Beatles and the Rolling Stones actually on TV playing their guitars. It completely took me over. When you can't see musicians playing any more, I'm not interested any more." Nothing says December vacation like overdosing on all movies you can possibly consume. The story between Mia Farrow and Woody Allen is fascinating, and today Fox Movie Channel (aka FMC) showed this 1995 movie based on the book written by their nanny... and it's horrible, but most things that try to stay loyal to the real story and is true-to-life usually are. I know Match Point was really good, but did we forget that Woody is pretty much an episode of Law & Order SVU? Though Mia Farrow has had a strangely interesting life - interesting in the tradition of the telenovella - this part of it is completely shocking, and totally gross.

If you're unfamiliar with the story... basically: [From Wikipedia]
Mia Farrow marries Frank Sinatra for two years starting in 1968, when she was 21 and he was 50. While she was filming Rosemary's Baby with director Roman Polanski, Sinatra served her divorce papers in front of the cast and crew. The move came as a shock to Farrow, who did not think that Sinatra would divorce her because she had refused his prior demand that she quit filming in order to work on his movie The Detective.

Farrow married German-American Jewish pianist André Previn in 1970. His former wife, songwriter Dory Previn, blamed Farrow for his leaving her and wrote a scathing attack in a song entitled "Beware of Young Girls". Farrow and Previn had three biological children together and adopted three children. They divorced in 1979, but remained on good terms.

In the '80s & early '90s, Farrow spent many years with Woody Allen, but did not marry/live with him. They had 1 biological son & 2 adopted children.

Ouch! The kicker: They separated after Allen began a sexual relationship with Farrow's adopted daughter (with Previn) Soon-Yi Previn, whom he later married. (As of Xmas eve this year, Soon-Yi & Woody have been married 10 years.) Their marriage reportedly left Farrow devastated. During the custody battle, Farrow filed child abuse charges against Allen, involving her other daughter, Dylan. Those charges were dropped, because the Connecticut state's attorney found that although probable cause existed for prosecuting Allen, it was not worth subjecting the child to the possible trauma of a court trial.

Angelina, you weren't the first - watch out for Zahara: Farrow has been a high profile advocate of adoption since the 1970s, adopting children from poverty stricken regions, many of whom were deemed "difficult to place" due to biological handicaps. She adopted 3 children and has 3 biological children with Andre Previn. She also adopted 2 children and has 1 biological child with Woody Allen. Farrow went on to adopt 5 additional children as a sole parent thereafter. Her last adoption was in 1995. [List of Mia's kids, if you're interested.] Farrow has fifteen children, eleven of them adopted.

She is active in agencies that encourage adoption, as evidenced by her involvement with UNICEF. Farrow is estranged from Soon-Yi Previn since Soon-Yi's marriage to Woody Allen. She called the loss a "tragedy" in The Observer (a U.K. Sunday newspaper) and remarked that "she's not coming back". Farrow said of Soon-Yi: "She was on the streets in Korea when she was captured and brought to the state orphanage. And in a way I can see from her perspective — a very limited perspective — that she's improved her situation. For a little orphan kid from Korea ... Perhaps she's not to be blamed." In a widely circulated quote, Soon-Yi dismissed Mia as "no Mother Teresa."

It’s that time of year, and I hope this finds you in the holiday spirit!

To those of you who asked me what it was I wanted for my birthday back in May, I directed towards a few charities instead of purchasing me any gifts. And, where that is a really awesome way to support those organizations who need awareness and support – I feel that we can all bring it a little closer to home. We can all make a difference, and all it takes is the first step whether it be a small one or a nice big leap – the point is to continue the journey. I know a couple of you asked what I wanted for Xmas (or Channukah) already, and this is it! I really do have everything I could possibly need or want this year (have you SEEN my shoe collection?!)...

So instead of a present for myself, for the holidays I would like you to take the $ or € you would normally spend on a gift for me and put it towards products for your every day life and home that are earth-friendly. My hope is to introduce you to these products, and that you may continue to use them from here on out. (Sometimes all we need is that first reason for change!)

Give this to me for the holidays!!


The average American generates about 15,000 pounds of carbon dioxide every year from personal transportation, home energy use and from the energy used to produce all of the products and services we consume. You can calculate to see how much CO2 you produce each year.
http://www.climatecrisis.net/takeaction/carboncalculator/

After reducing your emissions you can do even more by going "carbon neutral." By supporting clean renewable energy, you can effectively neutralize your personal CO2 emissions. Your small investment will ensure that for every ton of carbon dioxide you are emitting, a ton of carbon dioxide will not be released into the atmosphere. Go NEUTRAL!

Here are some good places online to find more products if you’re familiar with the ways to make a change, as mapped out above.

If you really want to give me something, send me the receipt for your green products. I will be elated; After all there’s nothing quite like getting exactly what you wanted for the holidays!!
If you already got me something, thank you very very much!
If you weren’t planning on getting me a damn thing, thanks for reading this in any case.

Neil Gaiman posted this as a bulletin